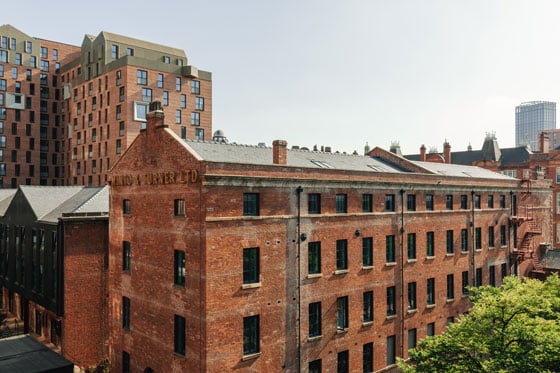 After decades of dereliction, two of Manchester’s beautiful Grade-II listed Victorian shipping warehouses have been repurposed by shedkm to provide much needed city centre housing for rent. The two warehouses, Minshull and Minto & Turner, are part of Kampus, a vibrant new residential garden community by developers Henry Boot Developments and Capital & Centric, adjacent to Manchester’s famous Canal Street and minutes from Piccadilly Station.

In line with the client’s ambitions to create a diverse and accessible new neighbourhood with a mix of uses, shedkm’s approach has focussed on increased connectivity across the site, with active frontages to buildings wherever possible, and a clear sense of placemaking which is pedestrian-friendly, and which effectively delineates public and private spaces.

shedkm have sensitively restored the warehouses, significant in understanding Manchester’s successful trading history, to preserve the best of their historic features such as the original cast iron columns and brickwork, whilst creating 58 contemporary loft style apartments with access to a range of on-site community amenities including gym, yoga studio, and cinema.

As much as possible of the original fabric, structure, and features (such as hoists, external escape stairs and machinery) have been retained and restored, celebrating the industrial heritage of the mills from entrance to apartment. A new cloister element within Minto & Turner activates the inner face of the buildings to give apartments dual aspect views, with planted steel window boxes which echo the garden spaces below. A minimal material palette showcases the red brick, cast iron and exposed timber synonymous with Manchester’s built heritage. These projects embody shedkm’s 25-year approach to sustainable renewal, with the repurposing of existing structures wherever possible.

The listed buildings are linked to a site-wide Energy Centre with a Combined Heat and Power (CHP) system. Structural elements to the new centralised residential core within Minshull House have been designed to thread through the original structural elements in a strategy to minimise demolition works. The recladding of the key garden-facing elevation offered an opportunity to upgrade the thermal performance of the building and tie both buildings into the materiality of the wider scheme through use of profiled aluminium cladding.

In addition to the two refurbished warehouses by shedkm, Kampus will comprise several other new and old buildings to consolidate the rich built heritage of the area and make a significant contribution to its public realm, with a new central garden space and the Bungalow, which operates as a village hall for events and community groups. shedkm’s project reinstates Little David Street, a charming, cobbled street closed off for decades, which runs between the two buildings. The street has been opened up again to the public as a lively new thoroughfare with bars, cafes, shops and restaurants.