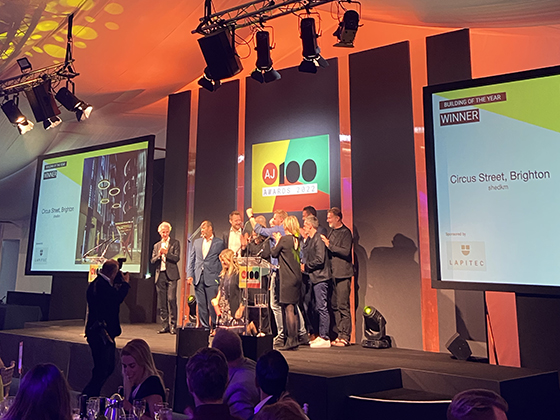 The winners were announced last night (22 June) at the AJ100 Awards in London.

Managing Director Hazel Rounding said: “We are over the moon at this recognition in our 25th year. As a Liverpool born practice who brought our urban approach to London 10 years ago, the awards are an amazing achievement for the entire team.

“Circus Street is the project that embodies 10 years of cross studio culture, individual strength, and key relationships, but fundamentally an understanding of the importance of regenerating cities through public/private investment, bold architecture and the creation of social value and place.

“We’d like to thank everyone involved over the 25 years for what remains a truly collaborative achievement!”

The Architects’ Journal judges applauded Circus street for: ‘its sensitive massing and scale and as a new piece of city which impressively filled a hole in the urban fabric, and in doing so, provided the bones of a new neighbourhood’.

They said this about shedkm: ‘the Liverpool and London-based practice has made an instant impact on the AJ100 after being shortlisted in four categories including the coveted Building and Practice of the Year awards.’