What are you looking for?

Chimney Pot Park, completed in 2008, is one of shedkm’s most radical and inventive schemes, emblematic of our approach and design.

Previously a group of rundown and derelict streets in Salford, Langworthy as it was then known, was identified as a project due for ambitious urban renewal. The local council wanted to provide an element of social or affordable housing to attract first time buyers, but it also needed to be a profitable enterprise for a developer.

Rather than demolish or give way to a complete contemporary replacement, shedkm’s approach was to retain the existing street pattern and design a radical evolution of the terraced housing. Our idea was to celebrate the desirable aspects of this typology – the human scale, tradition and existing fabric – whilst designing out its constraints to accommodate modern living standards and preferences. 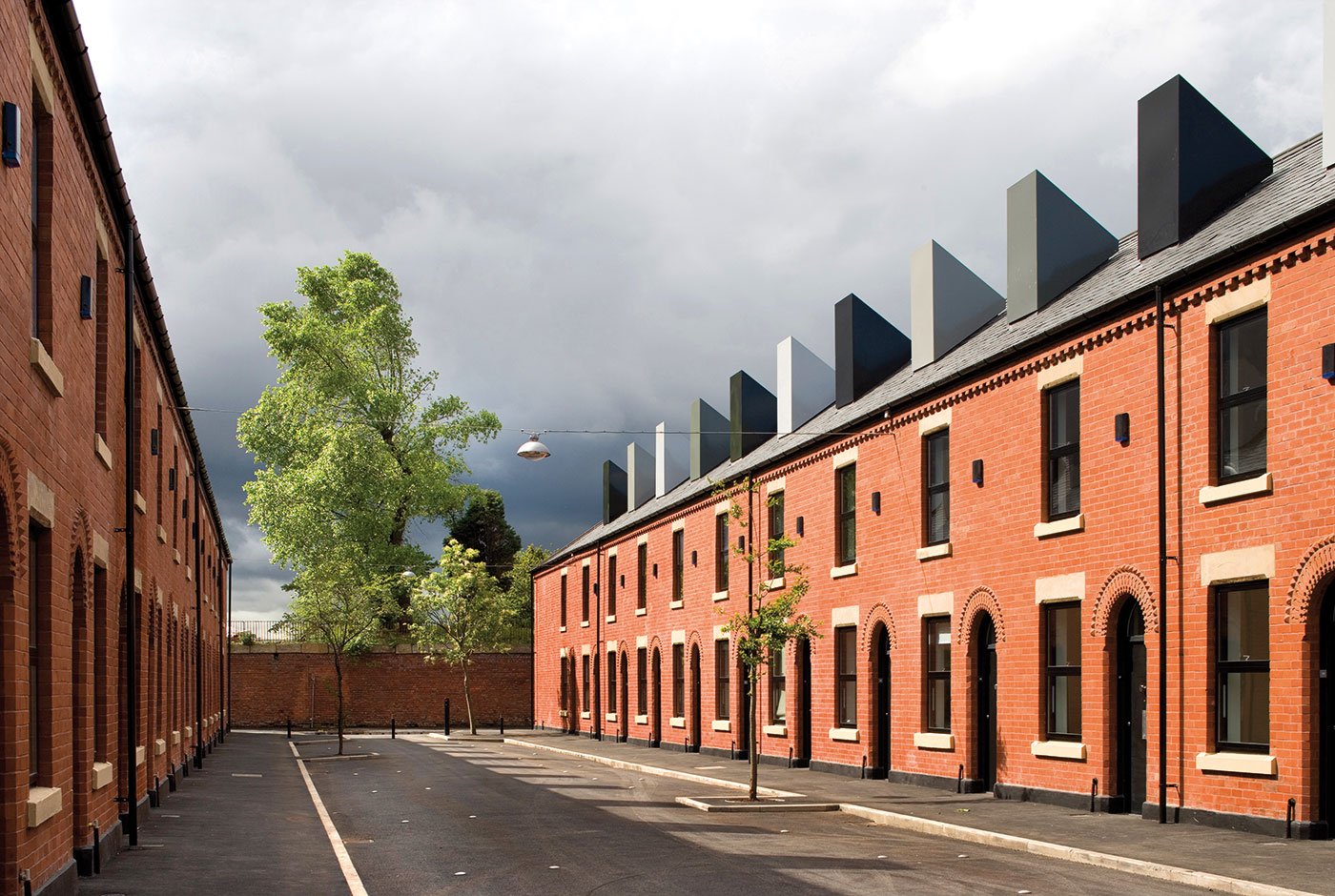 In an innovative move, we inverted traditional space utilisation, placing daily living accommodation, including kitchens, at the top of the house with the bedrooms on the ground floor. Roof lights, inserted where the chimney once would have been, replace a plume of smoke with a shaft of light, and symbolise a reversal of fortune for these once condemned terraces. 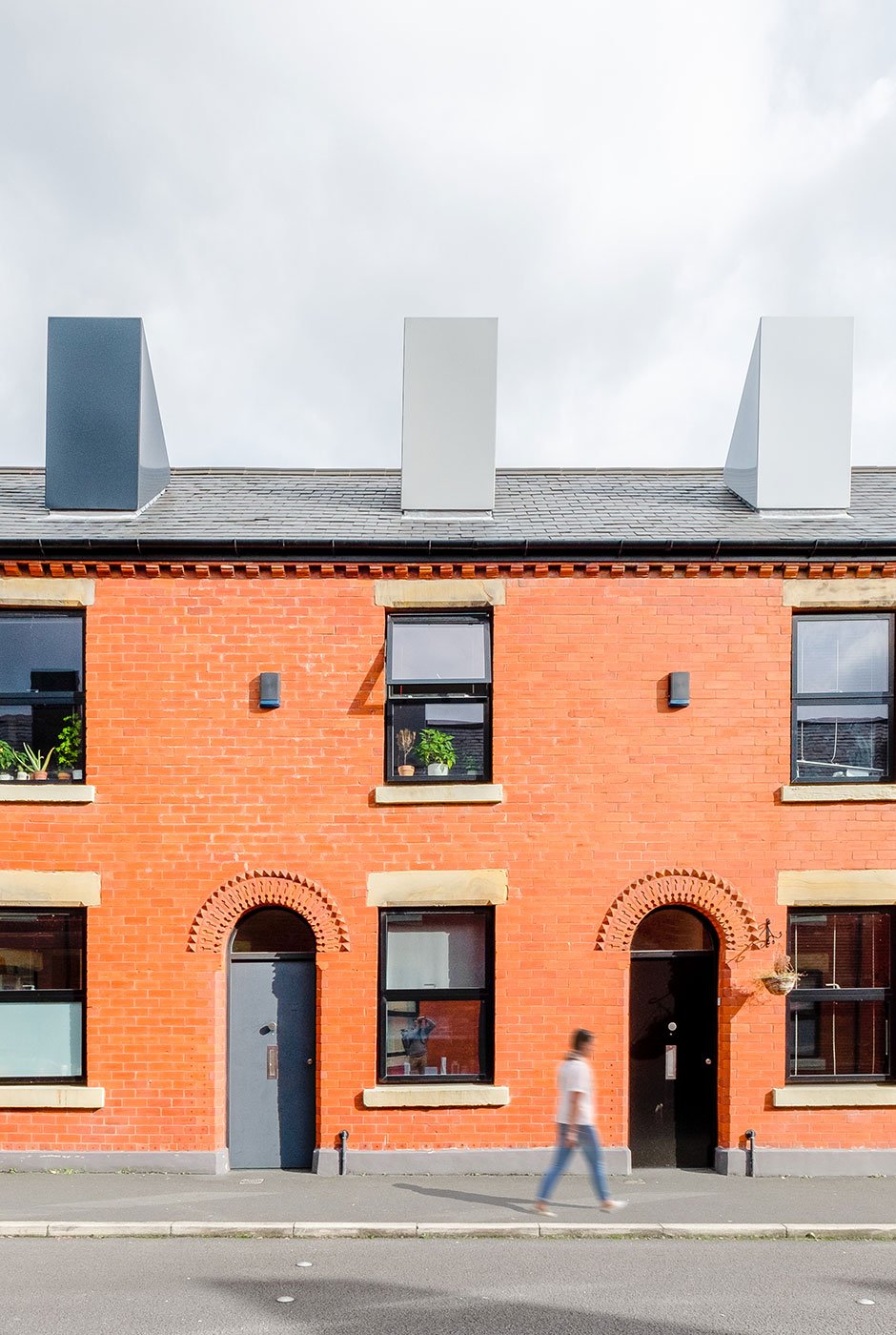 the ‘upside down houses’

Each house has its own private decked area with outdoor terraces provided at 1st floor bringing natural daylight into the heart of the building to create bright and airy interiors.

An open feeling across the scheme is maintained, with landscape communal areas helping to promote a sense of community between neighbours which had long since disappeared. This simple innovation has given new life to potentially redundant housing stock. 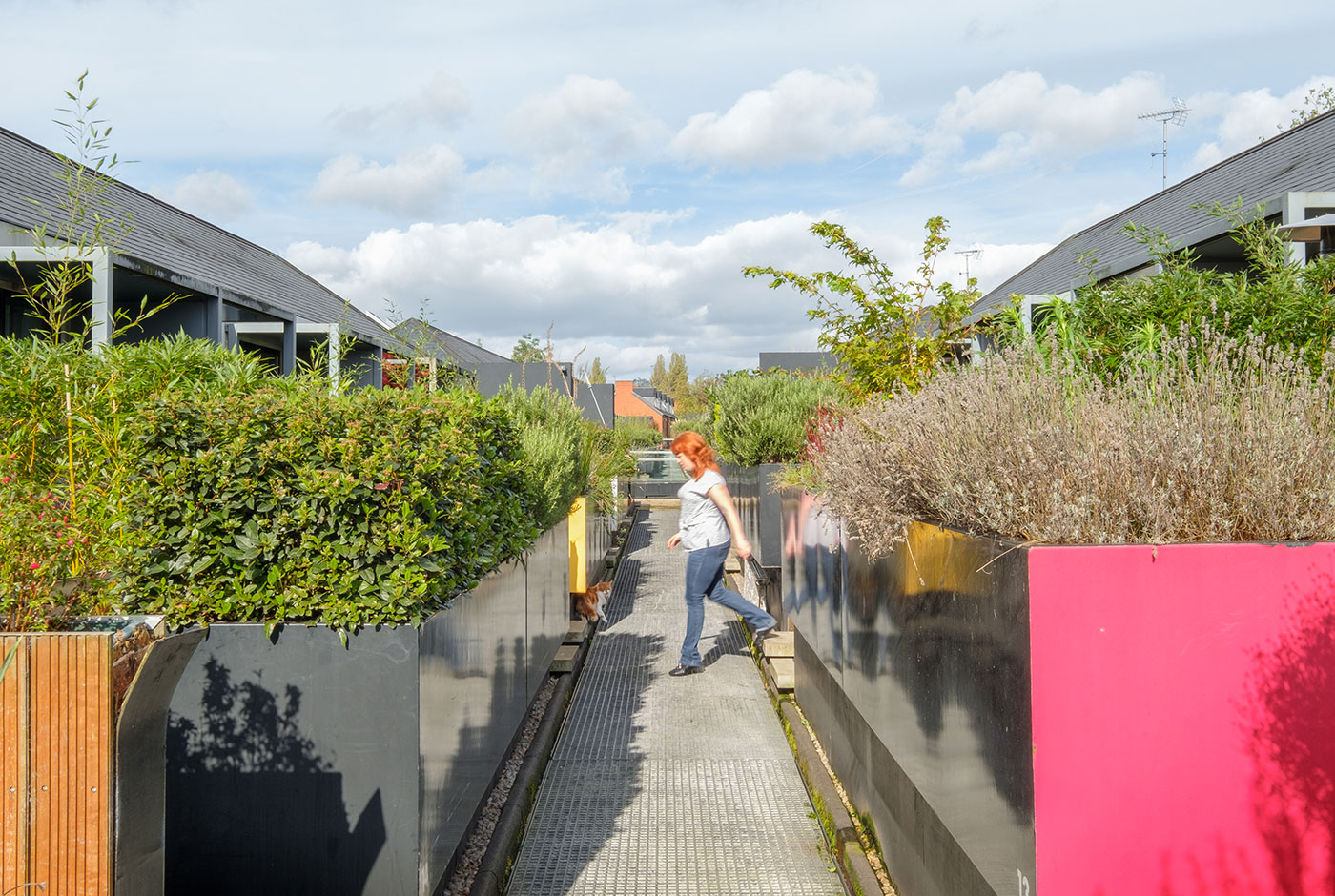 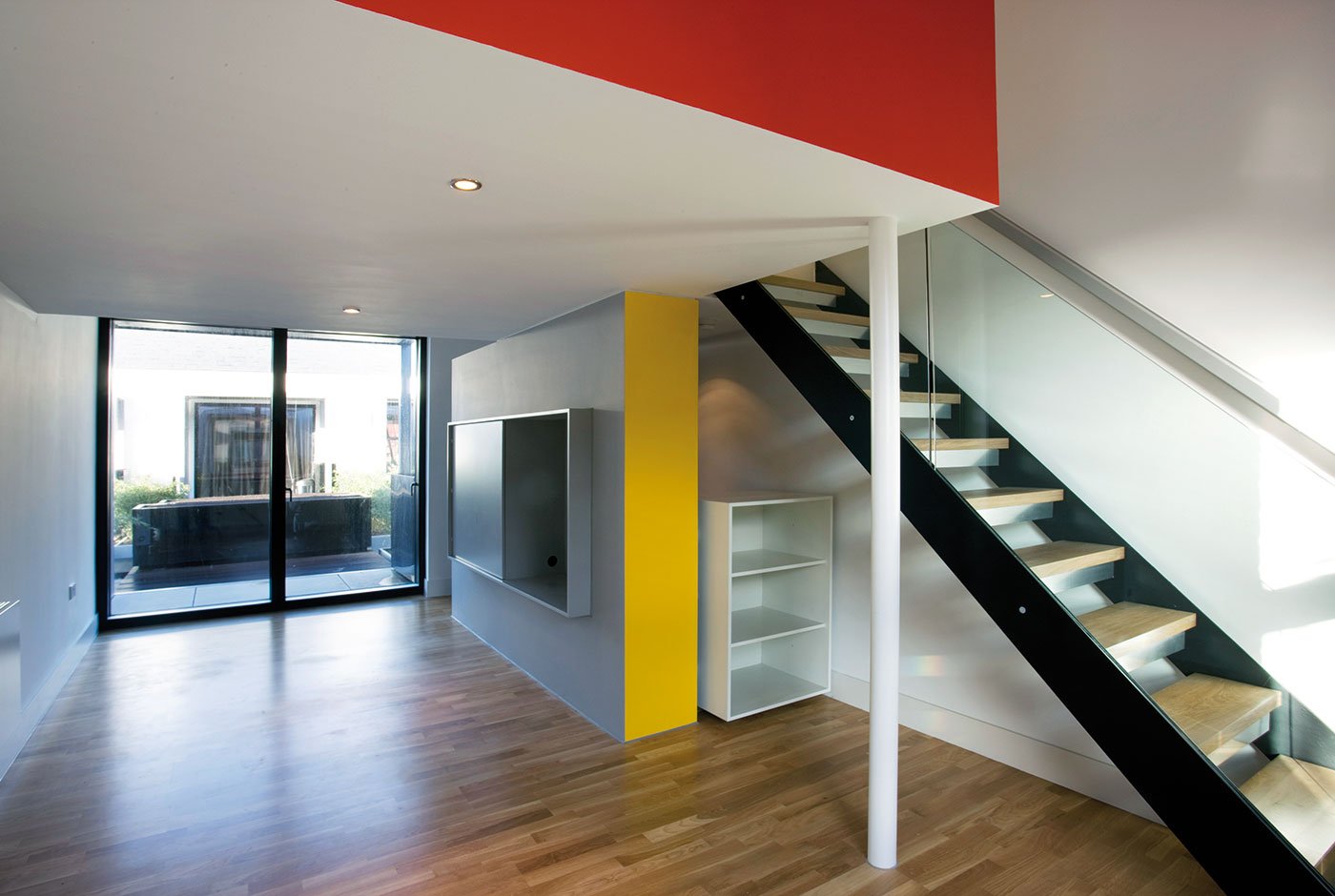 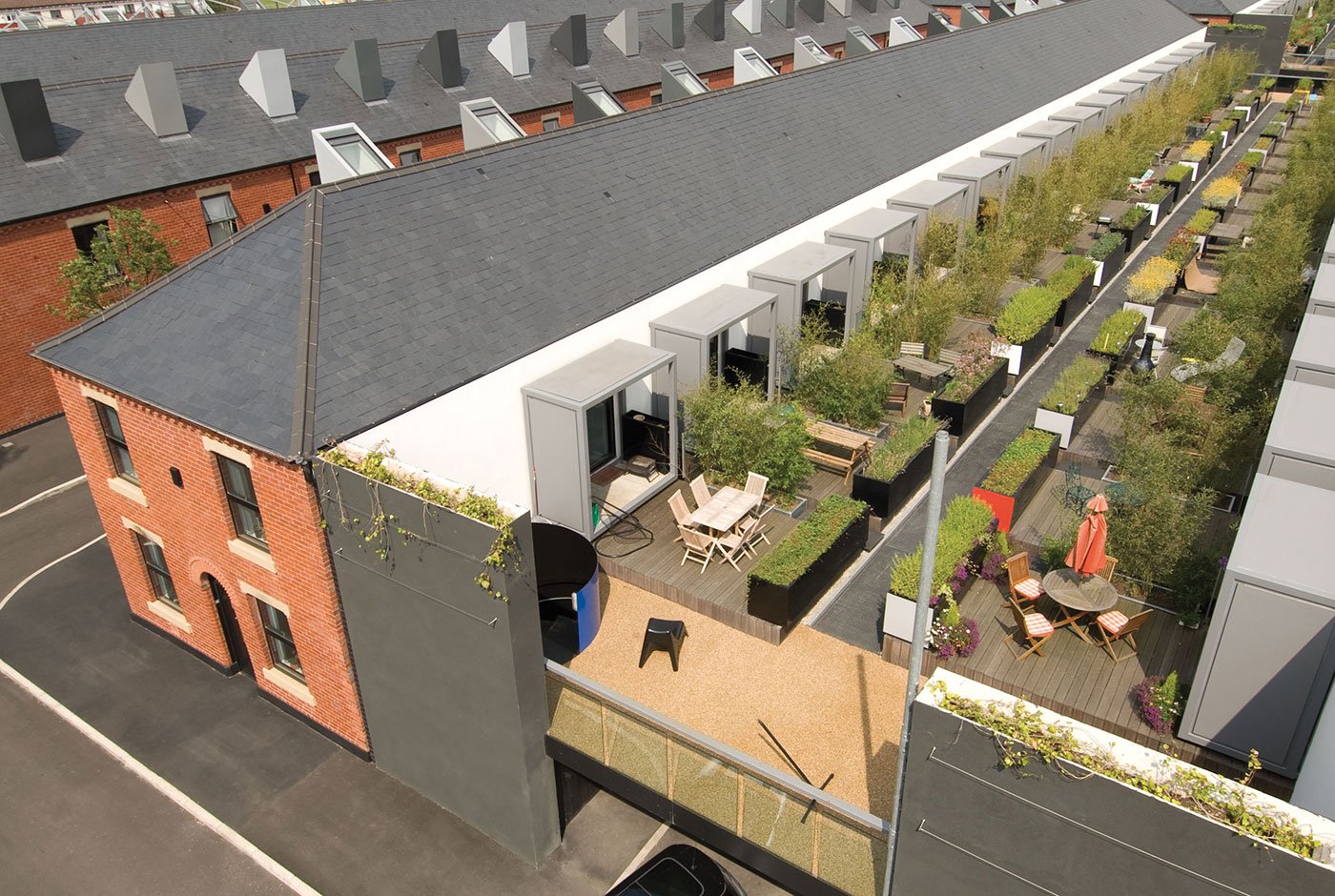 This not only allowed the architect and contractor to develop an efficient working relationship, it also provided comfort for developer Urban Splash who were able to roll out a phased marketing/occupational programme.

Initially, our approach had been to strip out the shells of existing terraces and then infill with new structure, services and finishes. VAT regulations made this approach financially impossible, and so a total new build solution was developed. Street facades were retained and made good, with new core structures built behind. 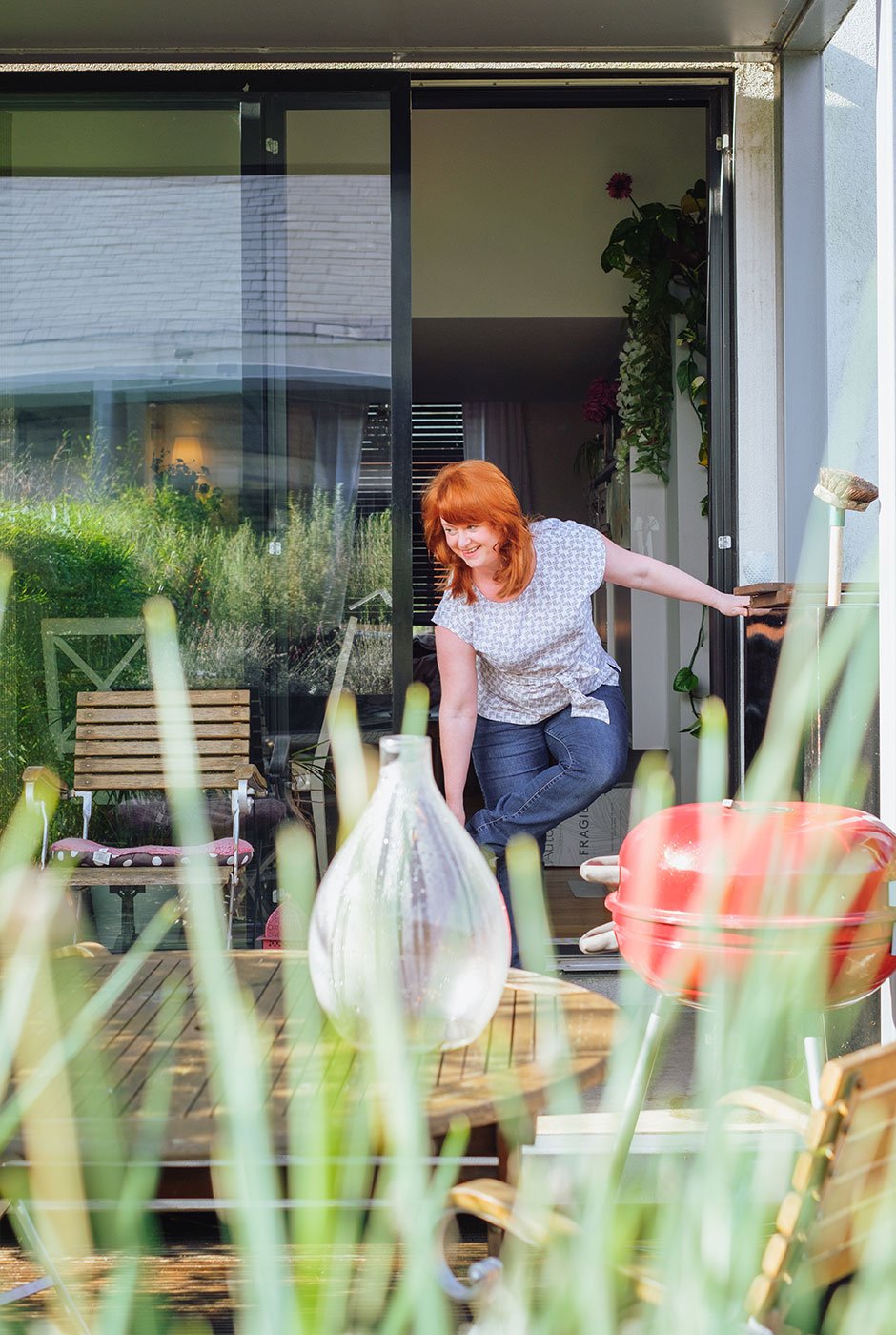 a conversion of past liabilities to assets of the future

Despite a potentially repetitive process, subtle variations in unit size and layout, and site dimensions meant that shedkm was involved throughout at a close level of detail and management. Facade retention presented some additional challenges and cost implications but once overcome, was rolled out street-by-street in phased programme of demolition, foundation work, frame erection, infill and finishing. A steel frame system was developed for speed and expediency. An early exemplar of sustainable construction, Chimney Pot Park used prefabricated, SIP panel construction and natural stack ventilation.

Langworthy, had long suffered from neglect, vandalism and a declining population. A major exercise in urban regeneration and rebranding, the reinvented houses of Chimney Pot Park demonstrated a modern concept of living that transformed lives and perceptions.

successful regeneration begins with a strong sense of place

we use cookies to ensure that we give you the best experience on our website. by continuing to use our site you agree to this. to learn more, please see our policy.OkPrivacy policy